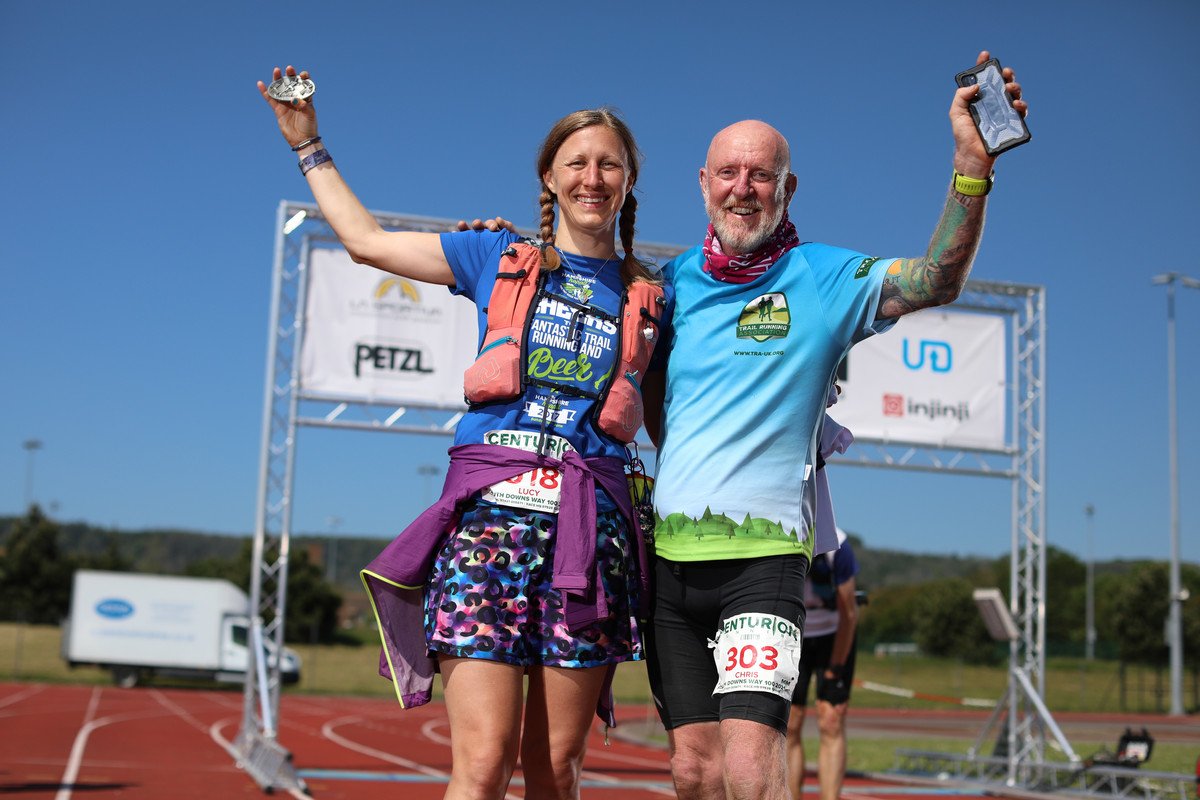 100-mile run Chris Poole completed a non-stop 100-mile foot race along the entire length of the South down’s way on Saturday and Sunday. The event starts in Winchester and winds its way east to finish in Eastbourne. The chalk ridgeway trails boast over 13,000 foot of huge rolling hills to be traversed within a 30-hour cut-off time. The lead up to this race and had been 18 months of major injury for Chris who even now is nursing a tear to his hip cartilage and associated pelvis inflammation. Training was compacted into about 12 weeks of sometimes intense running aided by gym, pool and cycle workouts. With a rolling start Chris set of at 5am into what was already a warm morning. Having only been running a short time a stone distance marker on the side of the road read. Eastbourne 96miles, that a hard thing to deal with, an unfathomable to distance to cover on foot let along if you were driving that far. Twenty miles passed by in four hours at an easy pace. Chris at this point meet up with a fellow ultrarunner he had known from other events. Ultrarunning is quite a small affair with many runners meeting time and again. Lucy was feeling very nervous about the night section and navigation plus was already starting to feel nauseous. They travelled the next ten miles in easy flow and completely reworking their pre-planned finish times and schedule. Chris had by now felt he needed to help Lucy on as far as possible. It was agreed to slow things down and grab some rest in the sparce shade when possible. At 35 miles what they described as heaven came into view, a café in the middle of nowhere selling ice creams and cold drinks. Callepo and ice-cold apple juice was so welcome. Much to the amusement of patrons a steady trail of exhausted runners queued up like excited children to get their lolly’s. As predicted the completely exposed ridgeway had turned into what Chris described as a furnace. From 9am temperature steadily increase to a staggering 40 degrees as recorded on a runner’s gage. The heat was compounded by the chalk trail reflection. From 4pm to 6pm the heat really took its toll on runners with many having to pull out of the race, some requiring medical treatment including at least two rushes to hospital. Find toll of runners not finishing was a huge 33%. Onto into the night they continued, aided by food stations approximately every 10 miles where much needed resupply of water and snacks were available. Lucy had been feeling nauseous most of the day with Chris trying to get her to keep drinking and eating and at times simply sit down and rest to lower her heart rate. Darkness fell at about 11.30 and the heat simply changed from intense to what felt like a pressure cooker. At some point this finally got to Chris and intense vomiting followed for a while. The next 4-5 hours was simply getting your head down and grinding out the miles to an awesome sunrise at about 4.30. Moods lifted and thankfully a strange low cloud a period of cooler temperatures. Pushing on to 86 miles and again blasting sunshine Lucy and Chris parted ways. At some point runners need to run their own race and much as it had been fantastic to share 65 miles Chris was confident Lucy was able to make the last 14 miles on her own pace. With an emotional see you at the finish line Chris cranked up the pace, two aid stations were ignored apart from chucking water over his head. 97 miles done and at the apex of the last hill the town of Eastbourne came into sight. An un-runnable gully down of the ridge way finally joined tarmac where Chris ran his fastest miles of the race. Entering the sports complex and traveling around the 400m running track was hugely emotional with woops and cheers from the crowd. Chris crossed to line in a finish time of 28 hours and 44 minutes. Not the time planed but fast enough to win the converted 100 milers finishers buckle. Lucy finished a little while later and cheered in by Chris. Chris and Lucy enjoyed cold drinks, food and finally taking their shoes off as they watched the other finishers arrive. Trying to take in the journey they had been on.
It’s hard to put into words how anyone can find enjoyment in so much suffering but if was easy everyone would do it.